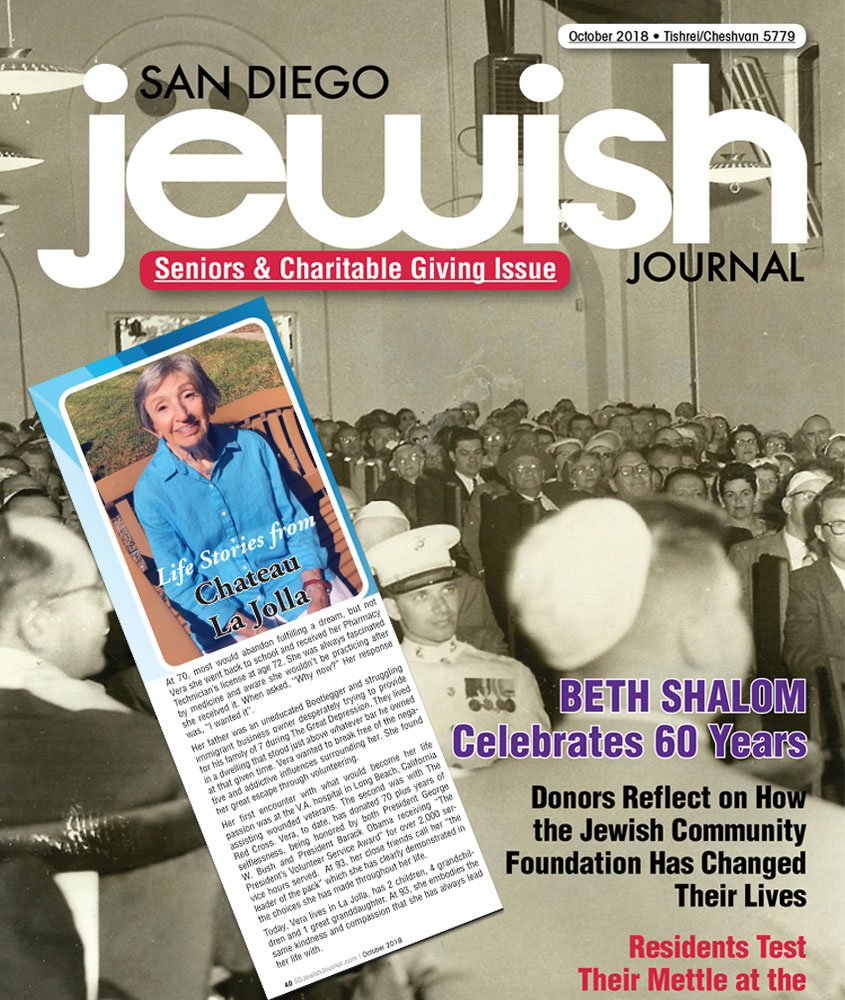 The San Diego Jewish Journal is the pioneer Jewish lifestyles magazine on the West Coast. It is our honor to have one of our residents stories featured in the October 2018 issue. Life Stories from Chateau La Jolla, tells the story of one of our most treasured residents, Vera.

At 70, most would abandon fulfilling a dream, but not Vera…

At 70, most would abandon fulfilling a dream, but not Vera she went back to school and received her Pharmacy Technician’s license at age 72. She was always fascinated by medicine and aware she wouldn’t be practicing after she received it. When asked, “Why now?” Her response was, “I wanted it”.

Her father was an uneducated Bootlegger and struggling immigrant business owner desperately trying to provide for his family of 7 during The Great Depression. They lived in a dwelling that stood just above whatever bar he owned at that given time. Vera wanted to break free of the negative and addictive influences surrounding her. She found her great escape through volunteering.

Her first encounter with what would become her life passion was at the V.A. hospital in Long Beach, California assisting wounded veterans. The second was with The Red Cross. Vera, to date, has donated 70 plus years of selflessness, being honored by both President George W. Bush and President Barack Obama receiving “The President’s Volunteer Service Award” for over 2,000 service hours served.  At 93, her close friends call her “the leader of the pack” which she has clearly demonstrated in the choices she has made throughout her life.

Today, Vera lives in La Jolla, has 2 children, 4 grandchildren and 1 great granddaughter. At 93, she embodies the same kindness and compassion that she has always lead her life with.